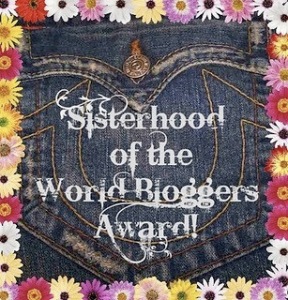 Wow – this has been an amazing week (it may just start going to my head now…).

First, a mere week after my first two award nominations, Perse at Far Beyond The Stars nominated me for the Versatile Blogger Award, which I finally accepted in my previous post. Then, a couple of days later, A Momma’s View kindly nominated my for the Sisterhood of the World Bloggers Award. I’m not sure what the origins of the award are, but it just sounds so impressive. So thank you very much for the nomination, and as always, thank you for your own awesome blog(s).

This post, as you can see from the image & title, is my acceptance of the Sisterhood award…

1. Thank the blogger who nominated you, linking back to their site. Above

2. Put the Award logo on your blog. Above

3. Answer the ten questions sent to you. Below

4. Make up ten new questions for your nominees to answer. Below

My questions to answer:

1. If you could travel to the future, only to one specific time, when or what would it be and why?

I would like to travel maybe 100 years into the future to see how my direct descendants live their lives – so much has changed in the last 100 years, when my grandparents were teenagers/young adults – so many scientific advances, technology, medicine – that I’m more than a little curious how it will look in another 100 when my own great-grandchildren are the same age.

2. Who do you consider the most influential person in the world?

Impossible to answer – different people are influential in different spheres for differing reasons. Personally, I admire Stephen Hawking more than most people, but certainly his sphere of influence is limited. The Pope has a great deal of influence, even among non-Catholics, but I also sometimes fear that celebrities have become more influential than thinkers or diplomats in our current culture.

3. Do you speak more languages than your mother tongue? If yes, how many and which one(s)?

I took 4 years of Spanish, and 3 of Latin in High School, but I would be lying if I said I spoke a language other than English (although I can read a bit)

There are so many places that I want to go & things that I’d still like to try. Right now, taking a supercar (not entirely picky) for a lap on a race track while I’m still fit enough is probably at the top of my list.

5. If you could be an animal for a day, which one would it be and why?

a snow owl – they’re beautiful birds, very capable of taking care of themselves, can fly, and have excellent eyesight. And owls are my totems.

6. Who is your favorite Character in a book, TV Show or Movie and why?

George Smiley. I love John LeCarre, and in George Smiley he painted a picture of a brilliant, flawed, hero – who really wasn’t all that nice a guy. The character stayed with me through the decades in a way that few other characters have.

7. What advice would you have loved to have been given when you were young?

Don’t sweat the small stuff. And it’s something I continually try to reinforce in my own children.

9. What is the question people as on a regular base which annoys you the most and why does it annoy you so much?

I couldn’t think of one. Generally, though, ‘favorite’ or ‘least favorite’ questions always seems to stump me (& I hate being stumped) – but in all cases, the answer is usually ‘it depends’.

10. Which quote you feel could have been written for you or your life?

There are many, but this one is probably most appropriate:

“The pessimist complains about the wind; the optimist expects it to change; the realist adjusts the sails.”

As far back as I can remember, I’ve been a pragmatist – and a firm believer in adaptation. Probably explains why Tai Chi was the only martial art/moving meditation that I bothered to learn.

10 Questions for my nominees to answer:

Some of you were nominated by me earlier today for the Versatile Blogger Award (partly because my ‘following’ list is still relatively short & that award wanted 15 nominees). You are, of course, under no obligation to accept or acknowledge the nomination(s).  I also know that many of you have been nominated for multiple awards recently, and that a few of you don’t accept awards.  I hope that by sharing these awards new readers find you.

Voices From The Margins

I try to stick the following posting schedule:

And of course, additional posts when I have something to share.

Sometime around the 20th of each month will be Compassion specific posts, as a part of #1000Speak for Compassion.

Thank you for joining in the discussion

Unless otherwise noted, all photographs are original works by the author.